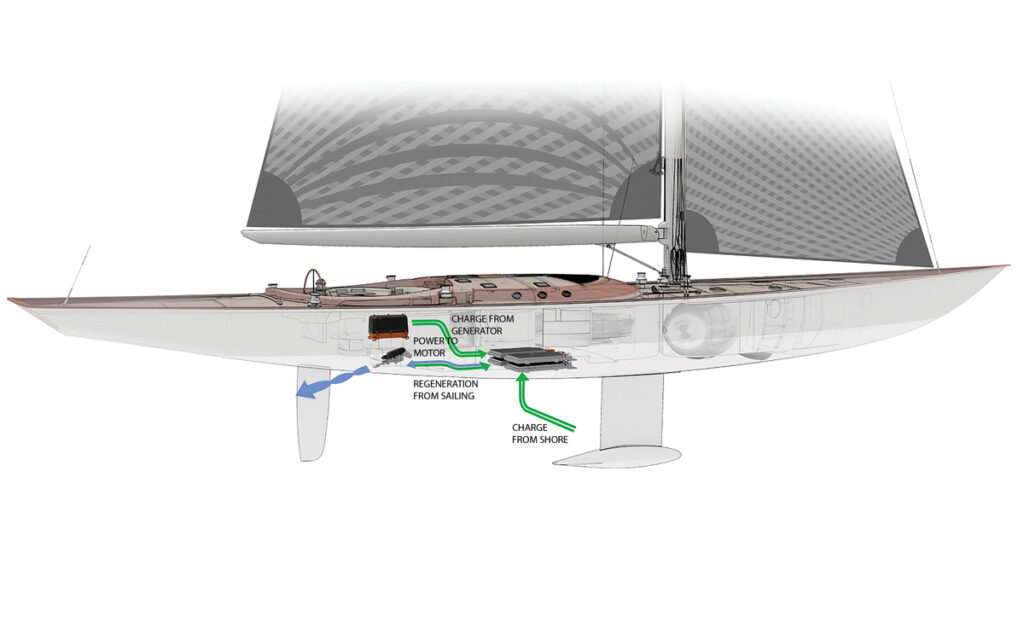 The electric sailing revolution is coming – and though adoption in the marine sector is proving much slower than in the automotive world ashore, progress is being made. However, one has to admit that the market is still relatively small but growing.

Today electric systems are offered at a quite competitive price. When we add to that the fact the electric system is almost service free, the total cost of ownership is turning in favour of electric.

The system takes up less space than the standard diesel, is much quieter and vibration- and emissions-free. A key part of the viability of electric propulsion rests on the notion that a smaller motor can achieve the same work as a bigger diesel. There are two elements to this. First, a diesel engine is not an efficient converter of chemical energy into thrust, creating a lot of heat and noise in the process. Second, the torque characteristics of electric are much better than diesel.

A diesel engine develops optimum torque between 1,800-2,000rpm, while electric motors deliver it from 0 to around 2,000rpm. This allows electric motors to use higher efficiency propellers that are slimmer and more steeply pitched.

The system also allows running all sorts of comforts on board that would normally require a generator: from hot water on-demand to coffee makers and freezers. This system is able to supplant generators on almost all boats that currently have, or would like to have, a generator.

From a design standpoint, electric propulsion is more in-line with a sailboat’s form functions, enhancing both the sailing and motoring experience. Quicker access to power, concise control and comfort all lead to higher user enjoyment, more frequent use of the vessel and ultimately market growth for sailing as a whole.

The helm’s ability to start and stop the vessel is much smoother and easier with electric motors’ constant torque. Switching direction without a gearbox or its associated lag, the constant high torque and fine-tuned control lever all contribute to making vessel navigation in tight places and docking far easier. Also, because the system doesn’t need to idle or be ‘started’ propulsion is much easier to access when needed and can be used strategically to make day-sailing and cruising much easier and more enjoyable.

With greatly improved handling performance, the switch to electric propulsion is justified as a value proposition. If a vessel is easier to handle, stress goes down and enjoyment goes up. Something as simple as docking anxiety can ruin an experience and turn off users from sailing. A vessel that is smooth, powerful and reliable will be more attractive to be used and enjoyed, ultimately more than justifying the initial cost.

The best value can be realized when designing vessels, and identifying existing vessels, where sailing and hull performance will optimize electric propulsion and the ability to regenerate while under sail. The complete system will combine with solar and/or wind inputs to allow for completely self-sustaining vessels while underway or moored.

Because of the highly reduced complexity of motors, breakdowns are far less frequent. Maintenance is a tiny fraction, therefore delivering much lower cost of ownership than a traditional engine driven system. Especially for fleet vessels and charter vessels, electric propulsion makes them more profitable to operate and decreases out-of-service periods for maintenance and repair.

In a commercial application the value is realizing return on investment, or for the private user who values reliability and robustness, the value is also clear. Here is yet another point where the switch to electric propulsion can completely justify the cost.

Another advantage is in how service and support can be much quicker and more comprehensive. Because everything is talking together and integrated through the remote service interface almost every possible issue can be seen through diagnostic software and services. Anywhere in the world where the vessel can get online, service technicians can log into the system and diagnose and repair issues remotely. Upgrades and refinements will simply be remotely installed because many of the design and performance improvements will be through software improvements.

It also allows very capable vessels to be either smaller or faster. In both cases the cost of ownership is highly reduced. Smaller vessels with owner-operators can be overall more capable, much easier to use docking, sailing and while at anchor. Faster vessels can weigh less while prioritizing speed over range and other luxuries but still have much more capacity to the users. Vessels that go largely unused by operators now will be more appealing as electric due to ease of use, reduced stress through breakdown and ultimately the reward of being able to sail well enough to be energy self-sufficient.

Sailing is one of the great leisure activities and electric auxiliary propulsion brings forward a new era. Vessels can now be emission free after production with incredibly long product half-lives and highly reduced cost of ownership.